Psychology of a Logo: Font

If you’ve been keeping up with the Sauce blog, you’re no stranger to how important a logo is. A logo is the visual manifestation of a brand’s identity. It’s often the first exposure to your brand a consumer will have and will affect how they feel about your company, adding to whether or not they want to do business with you. That’s why it’s so important to design your logo with your buyer personas in mind and create one that communicates your brand story.

Most of us have strong associations with the psychology of color in logo design which affects the way we feel, but the same could be said about fonts. By choosing the correct font for your business, you can convey your mission, vision, and brand identity visually.

For example, say you’re interested in communicating that your business has been around for ages and has a deep history within your community. You may want to choose a serif font that is more traditional and has been around just as long. What if your company is just starting out and you want to be seen as friendly and modern? You would want to steer clear of a more traditional font and opt for a clean sans-serif!

Because font choice will be the consumers first impression of your brand, it becomes very important that you understand the key differences between fonts and what they communicate to your audience. Let’s take a deeper dive into how things like font weight, spacing, and complexity can play a huge role in how your brand is perceived through your logo with font psychology.

Need a copy you can refer to later? Download our free guide to choosing a font here! 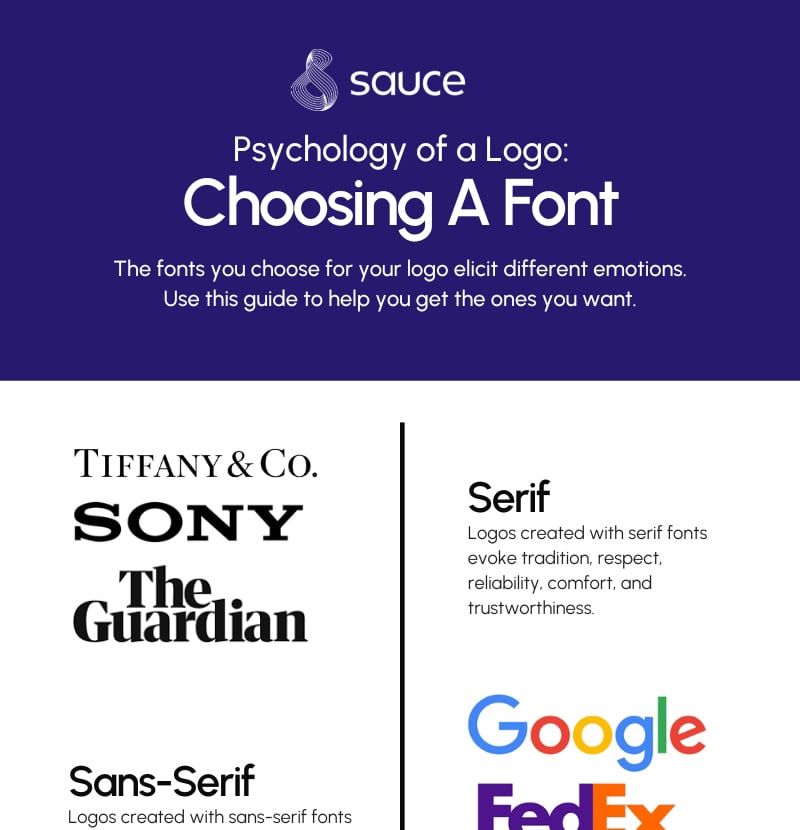 There are numerous font traits that create differences in types. Using a specific font can be more effective in the appropriate situation than others. Each person associates font traits with their own experiences. When viewing a font, the brain creates connections and comes up with a collective meaning, “a combination of semantic concepts (e.g., beauty) and emotional feelings (e.g., pleasantness).” This collective meaning is then compared with the context in which the font is being used and in this way, the person decides whether the font feels correct in that situation or not.

Now that you can see the importance of these subtle differentiators, let’s break down a font’s key characteristics and what they convey to understand the font psychology behind them.

There are many font traits, and though it may seem overwhelming at first to consider them when designing a logo, your brain already automatically makes these connections. By being aware of these font traits, you can use them to your advantage in your business’s logo design and make sure you're communicating what you want your brand to say through your font choice.

Being aware of font traits can go a long way in helping you to communicate your message and brand identity. However, because of the huge catalogue of fonts available for use and the fact that you can create your own font, fonts with specific traits can be further grouped together under larger categories.

There have been centuries and centuries of font creation in different cultures, parts of the world, and time periods. Through the constant creation of advertisements and brands that use specific fonts, consumers already associate certain types of fonts with emotions and feelings. If you stick to these common associations, it’s a pretty safe bet that you're going to be communicating the right message with your logo.

The oldest and most traditional of font types, the serif font has been around for centuries and is immediately recognizable for its “decorative stubs on a character.” The earliest use of the serif font can be traced back to traditional stonemasons, who used “flaring at the end of strokes” to make a letter’s lines neater when carved into stone.

With such a long history, it’s no surprise that when people see a serif font, they associate it with tradition, reliability, respectability, trustworthiness, and authority. Businesses that use a serif font in their logo tell a story of long-standing tradition and formality. Maybe they’ve been around for a long time and have multiple generations that have run their business or perhaps they mean “serious business” and represent a profession that is not to be taken lightly, like a law firm or physician’s group. There are so many logos that have used a serif typeface, but here are a few very recognizable ones:

Modern fonts, like sans-serif fonts (though they can also be serif fonts), are used to radiate strength, progressiveness, and uniqueness. They’re often trendy and have a variety of attributes/traits. They can have a combination of thick/thin strokes, be bold, or elegant but they all have one thing in common: they are read as cutting-edge and have a certain flair that is attractive to a modern audience.

Quite often a modern audience is looking out for these fonts in logos from tech companies and streaming services, to mainstream fashion brands. Here are a few examples of brands that have used a modern font to their advantage:

Script fonts are used in the logos of companies wanting to attract an audience searching for something more sophisticated. Coming off as more fluid and graceful, logos that use these fonts may even be seeking a more feminine buyer persona. A script font can also convey a sense of creativity and uniqueness that is attractive to those with a more ‘quirky’ audience.

On the other end, the use of a script font can also convey a sense of fluidity and class for those brands looking to give off a sense of history and elegance. A few, but very different, examples of well-known brands that use a script font in their logo include:

When a plain font simply won’t do, there’s display fonts. Display fonts are meant to grab the attention of the audience and often use unconventional and loud traits to do so. These are the most fun and unique fonts to design with, as in some cases, they are fully created by the designer. If pre-made fonts are used, they tend to be “twisted and turned to give the logo any desired meaning."

Brands that use display fonts are looking to be noticed and are not afraid to stand out. These fonts are commonly used by toy companies, fast-food restaurants, and within the entertainment industry. Here are some of the more ‘interesting’ display fonts that exude fun and playful energy:

A logo’s design is so important to your brand identity and how your current and potential customers perceive your company. By making the right choice when it comes to color and font, “you can communicate effectively with your target audience and create an emotional connection with them if you make thoughtful choices.” Using the psychology of fonts and selecting the right one can give you a leg up over competitors and ultimately let you stand out from the crowd.